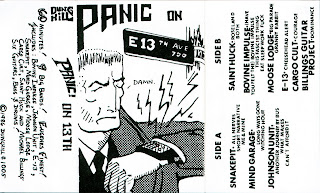 The first of several cassette-only Eugene compilations came out in 1986 courtesy of our friends at Dunghill Recordings. Many of the participants played in multiple bands on the tape and it's still surprising that there were this many bands at the time considering that there were ZERO venues for them to perform at on a regular basis. That situation didn't right itself for about 4 more years by which point every band that appears here was finished although Rawhead Rex and Uncle Charlie were pretty much Bovine Impulse and Johnson Unit with different names. This tape sold dozens of copies and was the start of it all! This updated post now includes the Snakepit tracks as Mike Johnson has given the blog a thumbs up!

Some notes from Steve Nordby aka Bobby Brady aka the guy who mastered stuff for Dunghill:

"Dunghill grew out of an idea of Al Larson to put together a tape of Eugene bands. We just asked friends to contribute.

The Dunghill investors were Al, Rob, John, and me. We all lost money.

"Panic on 13th" is raw and sweet and lovely and *the* Eugene sound that you hear echoes of decades later.

The Johnson Unit stuff here isn't anywhere else. "What Makes" is loaded with movie titles. (how many can you find). "Can't Afford it It" was a *very* early recording and the tape runs off the reel at the end.

I was impressed with Mind Garage, although I don't think I'd seen them before this compilation.

DOWNLOAD HERE
Posted by Here's another thing I haven't listened to in 20 years... at 4:15 PM