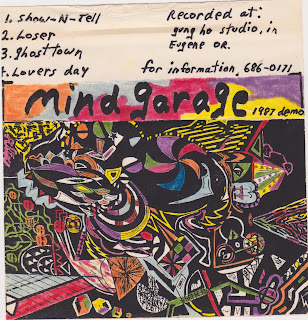 This 4-song tape and a couple of tracks on comp. cassettes are all that Mind Garage ever released. The band was around from '85 - '87 and played live very rarely if ever from what I recall. The only time I saw them was at a show in their practice space, there were maybe 8 or ten of us there. When the band finished they rushed us all out of the basement they practiced in, it was later explained that the people who lived in the house "would be home soon" meaning that none of us were supposed to be there. The band was Greg & Rich Babich (guitar and vocals), Vince Rivera (bass), Aaron Temple (drums) and later Doug Wilkerson (drums).

I have a few more tracks than were released, the first 7 are recorded in a studio, the last 7 are 4-track demos. There was certainly more recorded than this, anyone have additional material? By the way, song titles are all guesses other than the first four, eight and twelve.