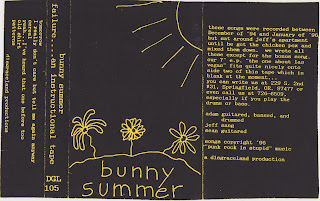 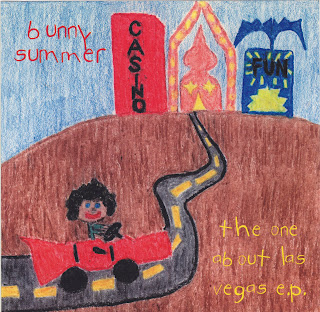 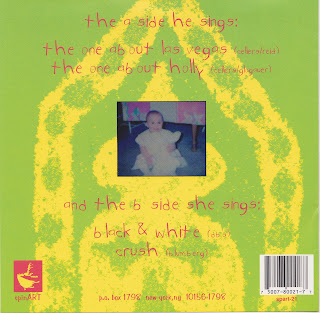 My band's only 7", recorded in 1991 and released by spinArt in 1994. We started this band during the height of the Nirvana hype thinking it'd be funny to play acoustic pop songs while opening for garage/grunge bands. Nobody agreed with us as we only managed to play live three times in the band's history and never with the same personnel. Liking Jonathan Richman too much was another reason this band came to be. Years later I would meet Jonathan with a girl I was dating at the time and spoke to him for a couple of hours. As we left, Jonathan told me it was nice to meet me, then gave his home phone number to my girlfriend and told her to call him if she was ever in the Bay Area which forever cured me of any romantic illusions I had about Jonathan and his material. Yep, fuck you Mr. Richman! I included our horrible version of the evil twin brother song "eppin'" as a bonus track. Apologies to Bryan for massacring his song.

We recorded the "Failure... An Instructional Tape" demo on 4-track during 1994 & '95. Never managed to reform an entire band again after Rachel moved to Portland but for some reason decided to continue recording. This tape was released in 1996 and I think we sold about 10 copies. 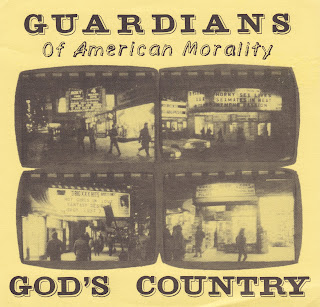 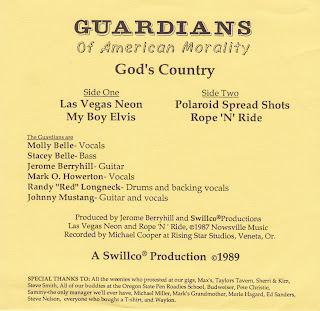 The Guardians of American Morality seemed to be the Max's house band in the late 80's. I think they played at the Vet's Club a lot too. I remember seeing their posters all over town - "The Guardians of American Morality, putting the Count back in Country!" which I thought was pretty funny especially in light of the overall conservative nature of Eugene. I think this was the band's only release, anyone know for sure? 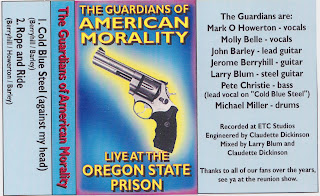 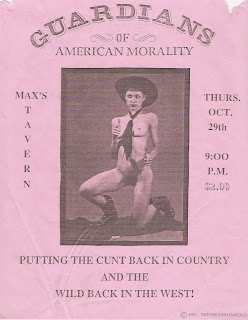 I think most of us who would have an interest in this blog are well aware of who the Guardians were and also how hilarious. Jerome was kind enough to send me this two track cassette which contains no live material despite the title. Not sure if these were ever actually released or if it was just a tape passed amongst friends but the tracks are well recorded and this would have been a fine follow-up to the debut e.p. Jerome also sent along the poster above which just about anyone who was around at the time ought to remember. My Guardians posts truly would never have been complete without the poster so I'd like to send a huge THANK YOU to Jerome for that and the cassette. Be sure to drink heavily while you listen to these tracks!

DOWNLOAD HERE
Posted by Here's another thing I haven't listened to in 20 years... at 9:29 AM 2 comments

The Crows existed in one form or another from '85 - '89 or so. That entire period produced just this single cassette-only release. I remember the Crows being controversial amongst other bands, mostly due to their tendency to staple their flyers right over the top of other bands' on telephone poles all over Eugene. Not sure how much truth there really was to that story, the Crows rarely played live although I heard they practiced everyday. Always liked this tape, never knew any of the band members well although I do know that Sean Smith later ended up playing in Superchrist with Doug Wilkerson from Mind Garage. Anyone who knows more about the band and it's history, please comment!

DOWNLOAD HERE
Posted by Here's another thing I haven't listened to in 20 years... at 9:40 AM 6 comments

Email ThisBlogThis!Share to TwitterShare to FacebookShare to Pinterest
Labels: 80's, Cassette Only, The Crows 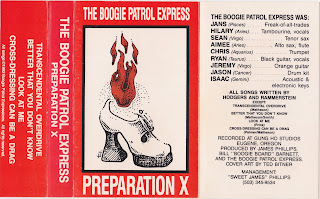 Great tape from a bunch of kids who were musically skilled well beyond their years. Don't know most of the band members' last names or I'd list them, guess the cover art will do. Interviewed them once for a paper or fanzine that I don't remember the name of, don't recall much other than the girl singer was a little snotty but they were teenagers so I guess 1 out of 8 is pretty good for a snotty ratio. They later released a full-length cd that I don't have and have been unable to find a copy of. Anyone?

1. Transendental Overdrive
2. Better Than You Don't Know
3. Look at Me
4. Cross-Dressing Can Be a Drag.

DOWNLOAD HERE
Posted by Here's another thing I haven't listened to in 20 years... at 10:08 AM 5 comments